Too little and egregiously late. Not to mention that A/V for normal consumers is still not included and will be coming in a few months.

As was mentioned in the last post, Automator is —

[…] one of those Mac OS X features that is seamless, excellent and should be used more widely.

“For what?” (That’s what most of my friends ask me when I tell them to use Automator)

I’ve used Automator for a lot of things, but the one task that I have used it for more than any other would be resizing images. So, let’s take that example and see just how seamless, excellent and easy Automator is.

Launch Automator, and choose a ‘Custom’ new workflow. You’ll be presented with an entire library of actions on the left and a blank grey section on the right inviting you to drop actions on itself, so let’s do that. Search for and add the following actions to the workflow by dragging them to the grey section. It is important that you maintain the order.

Under ‘Options’ for the ‘Scale Images’ action, tick the ‘Show this action when the workflow runs’ checkbox. This will allow us to specify the pixels (or percentage) we want the image to be resized on each run. 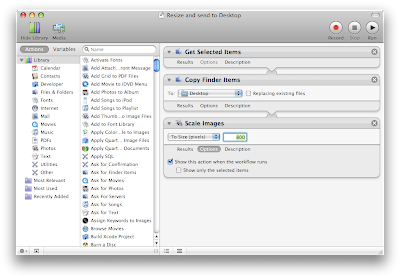 You could test by selecting one (or more) images in Finder and running the workflow from Automator. Once you’re satisfied, go to File > Save As Plug-in. Name the plug-in something like ‘Resize and send to Desktop’ and save it as a plug-in for Finder.

That’s it! Next time you want to resize an image (before uploading it to a website for example), select the image, right-click and go to More > Automator > Resize and send to Desktop. You’ll get a dialog asking for the upper bound (in pixels or percentage) you want to scale the image to and voila, you’ll have a copy of that image, resized and on your Desktop ready for uploading. Of course you can select multiple images and have them scaled in one go.

I know Preview in Leopard provides an ‘Adjust Size’ option under ‘Tools’ but you’ve got to agree, right clicking and selecting resize is way simpler (and faster too)! On the other hand, it's a god send for Tiger users (the ones who bother resizing images anyway).

And how can you not want to use an application that has such an awesome icon?

From Win32 to Cocoa: a Windows user's conversion to Mac OS X

A lot of this article is interesting because it talks about how developers and power users felt about Microsoft in its heyday and it really brings back old memories (back when I drooled over the gradients in the newly-released Windows 98's title bars).

It also talks about how Microsoft is facing huge problems with OS and application development right now and why that is, and why Apple has run-away successes with Mac OS X and the iPhone. All in all, it really strikes a chord with what I feel about such matters. Definitely worth a read. It's the first part of a three-part series according to the author.

Ars Technica takes a look at AT&T's newly released (in private beta) Pogo web browser. To me, Pogo looks very promising in terms of originality, but I feel that such an early review of it has done it quite a bit of harm in the publicity department and it might have been wiser for AT&T to wait a few more months and release a more solid beta (this is because the betas of 2008, unlike the betas of 1998, have much higher expectations). A couple of non-technical problems with Pogo (the linked article goes into the technical ones) seem to be (a) the company that's making it - I'm sorry but installing an application made by AT&T simply leaves a bad taste in my mouth and makes me assume that the browser's prospects are going to be very limited, and (b) it's name - I'm sure it'll get accepted by people eventually (the Wii did), but people need to be thinking of better names.

PayPal is ready to block Safari

It lacks EV SSL, which IE7 and Firefox 3 have. This comes as a strong measure to prevent phishing.

If I ask many of my hardcore Mac using friends whether they know they can customize the keyboard shortcut of pretty much any menu item in any application in Mac OS X, they would probably just say, "Yeah I knew that." But, honestly, how many users use this excellent built-in feature frequently? I feel that, just like Automator, this is another one of those Mac OS X features that is seamless, excellent and should be used more widely.
Let me give an example of how I recently used it to solve one of the nagging annoyances in an otherwise great piece of software. The case in point is Camino whose shortcuts for switching between tabs are Command-Option-Left Arrow and Command-Option-Right Arrow, which are different from my default browser's, i.e. Safari's, Command-Shift-[ and Command-Shift-] (Safari calls them Command-{ and Command -} in its Window menu, which I think is very idiotic). Getting used to Camino has many hurdles but definitely having a different key combination for my most used keyboard shortcut is the most annoying thing. The answer, obviously, was to just go into System Preferences > Keyboard & Mouse > Keyboard Shortcuts and add the requisite keyboard shortcuts myself (which override application defaults). 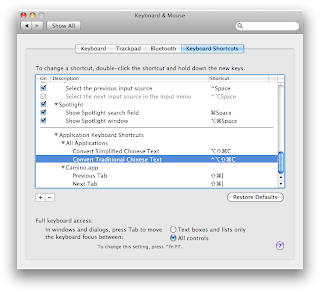 As you can see, I've also added a couple of system-wide keyboard shortcuts, which actually reside in the Services > ChineseTextConverter menu and which I use to convert text quickly and easily in any Services-enabled (i.e., pretty much any) application.

So, override away! Even on those applications that don't offer this feature through a preference. For example, if you just switched from Microsoft Entourage to Apple Mail, you can change Mail's Send Email shortcut to Command-Enter or make it Get Mail with Command-K. Nifty, what?

URLs Are Totally Out

I really have to agree with Cabel Sasser here that we are starting more and more to use search fields instead of URLs. It's just faster and easier even when one already knows the URL.

The Return of Demonoid

Demonoid.com rises from its ashes. I can't honestly say I was expecting this to actually happen.

Crazy Apple Rumors does a Podcast

This is gold. Really worth listening to.

I'm personally hoping that iTunes either starts to have all its songs in a DRM-free format or Amazon MP3 quickly rise to rob iTunes of this title. Amazon and Apple – here are two companies that, if they acted with their users' interest first in mind, would work together to provide an excellent DRM-free music experience with Apple's superior UI and Amazon's excellent collection, but won't for a variety of reasons that I wish didn't exist.

I haven't had a chance to play around with iPhone development myself yet but if I can start making and running iPhone software on the iPhone itself now instead of June, why not?

Yahoo! Messenger for Mac gets Voice!

I'm sure you were waiting too.