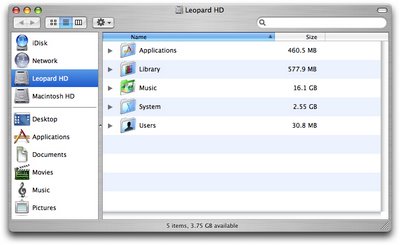 I write this with a heavy-ish heart because there is nothing I would like better for Apple to do than to have a totally bulletproof (rewritten or not) Finder in Leopard. Unfortunately, I have to admit that the chances seem to be slim. I don't think Apple is going to go beyond fixing bugs and making the usual incremental changes. Why?

Well, I always feel like I need to see everything from the perspective of an unbiased, average Mac user, and believe me, of all the complaints I have ever heard about Macs from normal people, none of them have been about the Finder. It's not a Finder I'm satisfied with (oh, I just need the tiniest reason to start Finder-bashing) but it works.

If you're not using network volumes or any kind of misbehaving volumes (failing hard drives or optical discs), you probably haven't experienced very many Finder crashes. Annoyances perhaps, but not many outright crashes. And perhaps a large number of people don't use network volumes. But Apple knows that a lot of people use networks now - oh, what a revelation! - and I expect Leopard to fix network-related Finder issues. Although not completely alleviated, I can see that some work has already been put into the Finder's network-related features. The Leopard update to Finder is probably going to make the current paradigm work without bugs and not radically change anything. 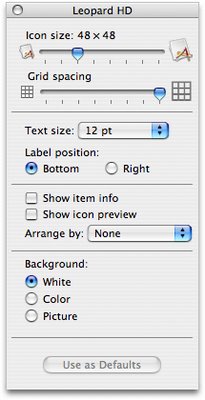 Another area where I expect the Finder to change is the Little Things™. The current builds of Leopard already show that Apple has addressed some huge usability issues related to views in the Finder. Grid Spacing is now an option as a lot of people find that the default spacing, although elegant, is much too spacious for smaller screens. Also, the stupidity of the View Options inspector being applicable to "All Windows" by default has been corrected and a much, much more common-sensicle "Use as Defaults" button has replaced that most annoying of radio buttons.

Another similar tweak is the fact that pressing Return to rename a file will now only highlight the part of the filename before the extension. And as you can see by the first screenshot right at the top, the Finder will also have alternating blue and white horizontal lines in the List view. Yeah, so basically, expect these but no real big stuff.

The true spatial Finder which I would prefer to this one is probably a dream that I should stop dreaming. It isn't going to happen. It's not a priority. A bunch of maybe… twenty… geeks want it which simply isn't enough to justify the work; also because most people seem to be perfectly okay with the current state of the Finder. On the bright side, the Dock's going to have spring-loaded folders, so hurray!

CrossOver Beta 3 is out and it can be grabbed here. Still quite useless, I'm afraid.

This is really happy news for people (like me!) who were horribly used to summoning iTunes' main window by pressing Apple-1. Well, now it's back and it's Apple-Option-1! Deep inside, I knew they'd have to bring it back eventually. And yeah, Apple-Option-2 is the rejuvenated form of Apple-2.