Fearing that many would miss this in the light of all the iPhone mania, Perian 1.0 is out!

For those not in the know, Perian is a set of "free, open source QuickTime component that adds native support for many popular video formats".

The stuff it supports:
Now go get it.

This is probably the worst thing to happen to someone today after patiently waiting 6 months for the iPhone to come out and then standing in line for hours to buy it.

Qualms:
We all know that software won't really be a problem because Apple will release updates even for the current iPhone based on user feedback (not having Flash in Safari? That will be a big deal for a lot of people). However, the things above are things that will only come in the next iPhone which will probably come in another year or so. As usual, memory will become cheaper, so I'm hoping for something like a 32GB solid state memory option in the next iPhone.
Let's also keep in mind that today is only the US release. All the rest of the world doesn't see the iPhone until 2008 and Asia is the biggest phone market anyone knows of. I don't know about other Asian countries, but in India at least, phones are usually not tied with service providers and so Asia should be a source of unlocked iPhones (of course once the iPhones are released today, hackers will get busy and there will be a hack before long, just like with the Apple TV hacks).
Also, Apple has some work to do before they release an Asian version. I don't know if their Asian development divisions (do they exist?) have been working on internalization in parallel or not but you have to realize that, for example, their really intelligent keyboard is really intelligent only for English. That won't be a lot of help if you're trying to input Japanese or Chinese (at least not until it's been adapted for them). So, in most probability, they should have a decent bit of internalization/localization work to do.
I'm in no hurry. I'll wait for iPhone 2.0. 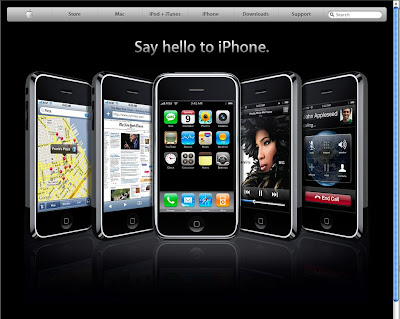 Today, Apple's home page is iPhone and only iPhone. I don't remember ever seeing those four rounded rectangles at the bottom disappear from apple.com before, so I guess this is important to them. =] 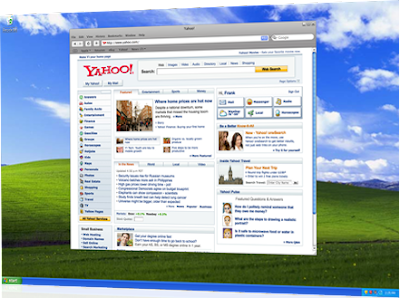 I'm sorry, but it a-sucks. You hear Mac people saying all the time how those Windows developers don't know what they're doing when they're porting applications to the Mac and make these fake Mac applications that're actually straight Windows programs with Mac title bars? Yeah, well, that's exactly what's Apple's done with Safari and iTunes and I've honestly never enjoyed using them on Windows. What they've made is merely the exact same Mac software with a Windows menu and title bar slapped on. Unfortunately for them (but mostly for us), that is not a Windows app!

But the look is not all. Since all the UI widgets used in Apple software is custom made and all their frameworks are custom made and loaded (keyword: custom), Safari is dog slow on even the fastest computers (and I am using a very fast computer, by the way). Now, some of you may say that, well, actually, it loads pretty fast. Yeah, so they've somehow managed to optimize the base loading time for Safari such that "something" shows up on the screen pretty reasonably soon. However, the time it takes for it to become responsive to keyboard and mouse events both after a fresh launch and after Alt+Tab-ing to it is unbearably high (anything that's not instantaneous is unbearably high). Also, Windows+Tab, Alt+Tab and other keyboard commands don't always work the way they should, and Safari doesn't do the Windows animations while minimizing, maximizing or restoring (key visual cues in Windows, the lack of which makes a program seem foreign). Safari also doesn't respect a lot of Windows HIG's such as the fact that windows in Windows are meant to be resizable from all sides and corners instead of just the bottom-right. Not only that, but the resize triangle doesn't disappear and continues to work when the window has been maximized. Lastly, and most irritatingly, Apple has forgotten all about "magic corners", the four corners on the screen that are easiest to reach with the mouse, which is why the Start menu is on the bottom left and the X button while in maximized mode, is on the top-right. If you use Apple software on Windows, you will notice that Apple has left a neat amount of margin in its X buttons such that you can't simply take your mouse to the top-right and click to close. No, you have to pin-point the mouse to the small X button (smaller than the standard Windows X buttons which are larger in both XP and Vista by default) to click it closed. Sigh...

In all, it's not a terribly satisfying experience. I know that a lot of people have got used to using iTunes on Windows, but honestly, I would be a very sad person if I were asked to use the current iterations of iTunes or Safari on Windows for the rest of my life. I like the font smoothing and all, but really, Apple needs to start making Windows applications for Windows instead of trying to make odd-looking and odd-behaving Mac apps for Windows.

Now that Leopard is up on Pirate Bay, it's only a matter of time before most of the Mac ultra-aficionados get their sweaty paws on it. Meanwhile, for those without the broadband muscle for the 6.07GB torrent, ThinkSecret has screenshots to quench your thirst.

I haven't seen the keynote yet but I do like Leopard. And here's what I'm really waiting for:

My thoughts are that even if this is not the actual transcript of tomorrow's keynote, it is a very likely candidate, and, if this is all that is introduced tomorrow, I will be more than satisfied. Go WWDC!

Coming out on the same day as Parallels Desktop 3. Got to love the virtualization wars.

The list of games supported by Parallels Desktop 3 is pretty awesome.

Egregiously cool. Points to take away?
I absolutely love how Parallels and VMWare are going head-to-head about capturing the Mac virtualization market because they are doing some awesome innovation here.

One of my two favourite browsers hits the crucial 1.5 mark. And, by the way, I love the design of the Camino website. It's so beautiful and elegant. The other is Safari of course.

The notable changes:
I'll wait for the benchmarks and see how this compares to the current line-up especially in graphics horsepower where Apple has always been criticized for keeping its high-end laptops underpowered.

Well, it's coming on June 29 and Apple has posted some ads about which I'm sort of on the edge, but..., anyway, I wonder if the iPhone is going to have GPS of some sort because that would be incredibly useful in giving you live directions if you don't have a GPS unit in your car. I know that some phones from Verizon (and possible other carriers) already do this and it's incredibly cool.