It's hilarious on principle. 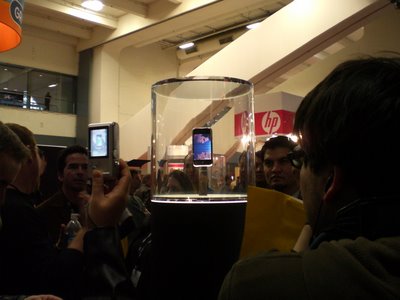 Regarding the iPhone: I'll see it when it hits the market. Currently, all there is at Macworld is one single rotating iPhone inside a glass enclosure playing a movie and a big screen on which an Apple employee gives the Steve Jobs-ish demo of iPhone every half an hour or so while entertaining questions from the audience.

Now, Macworld itself. Well, I'm in the camp that thinks it was a huge disappointment. Not a thing got announced, introduced or released that can actually be called a Mac or that runs on one. No hardware, no software. Gee, I guess I shouldn't have kept my expectations too high; it's only Macworld after all. My problem is not that Apple released a phone. After all, there is only so far you can go to continuously improve a product and the iPod has had five years of overhaul now. What annoys me is that they introduced iPhone at Macworld. I would have much rather had a more run-of-the-mill keynote which talked about the iPod's progress but didn't introduce much new iPod-related stuff, introduced a new iLife and iWork, and perhaps a new Mac or two. Maybe something new in iTunes, like more movie companies or perhaps a guy from Adobe or Microsoft demoing betas of their Universal Binary suites. What annoys me is that this Macworld (from the Apple stand point) had almost nothing to do with Macs. The iPhone only runs "Mac OS X" not Mac OS X and ditto for the Apple TV. What annoys me is that the iPhone could have been introduced at any old Apple Special Event like all those other weird things like the iPod Hi-Fi. Since they didn't even have iPhones that people could actually hold in their hands and use, there was almost no point in releasing it at the Expo. What would have made a lot of sense would be introducing, say, MacBook Pros with a new form factor, a Mac Pro with two quad-core chips or a revamped Mac mini. And what the hell? No new iWork and iLife was really surprising.

So, in my opinion, the Macworld show floor was pretty dull this year as compared to 2006 and I was honestly a bit bored. Still, I got some free goodies including a Disco T-shirt. :-D

So, after all that talk about Cider, the gaming thing based on Wine, nothing actually came out and now it's the new year. Here's another entrant. Something that doesn't use Wine and promises to convert Windows games' binaries to run on a Mac on a game-by-game basis just like Cider.

The difference is that, firstly, they've released a video that demonstrates it running a game "Prey" and secondly, they're allowing you to download, for fifty dollars, something that'll convert the Prey Demo for Windows to Mac and also earn you a lifetime membership which will let you download all the game converters they'll release in the future. Although I don't recommend shelling out the fifty bucks for this thing right now, I will be very interested to see how this turns out and I hope it's not a scam to get people to give them fifty bucks.

If this product turns out to be as good as it seems to be on paper, it might be a real seller in the college- and office-going crowds.