On Sunday night, I got the perfect opportunity to try out the brand new iTunes Movie Rental service because a bunch of people wanted to watch Ratatouille and I had conveniently misplaced my copy. So, I log on to the iTunes Store, against many protests that I shouldn't spend money to watch a movie, because I really wanted to try out the rental service and didn't mind spending $4 to do it. Everything went successfully as far clicking the Rent button and the movie starting to download, but when I double-clicked the movie to play it while it was still downloading (something you can apparently do on fast enough connections), it gave me one of those "unknown errors" that iTunes is infamous for. This was pretty ominous and I got the feeling that "movie night" wasn't going to happen; still, I decided to wait it out until the entire 1.25GB finished downloading because it was going to take only about 8 minutes or so. Once the movie finished downloading, as I expected, it yet again gave me the unknown error and wouldn't play. Sigh, I said, signed off, signed on, de-authorized, authorized, restarted - nothing.

Finally, since I was running 10.4.11, I thought I'd try it on a Leopard machine to see if it'd work there. So, I signed out of my 10.4.11 machine, de-authorized it and borrowed a friend's Leopard MacBook, on which, disappointingly enough, it told me that the movie was authorized for another machine and it wouldn't play. So, a complete no-go. This is the point at which I gave up and emailed Apple Support, who sent one of their idiotic auto-reply suggestion emails the next day, to which I've replied back and told them that no, none of their obvious solutions work for me and yes, I would like a real person to respond to my request.

I was really hoping for this to be seamless ("hoping" is a bit misplaced; I had pretty much "assumed" it'd be seamless), and I have to say this is probably the first time one of Apple's products has so blatantly failed me. I hope I get a useful reply from Apple Support soon. I will update this entry if/when I do.

[UPDATE: I got the money refunded, but no solutions.]

Can't buy it without the SSD, can't afford it with.

I know that the Mac version of Firefox 3 still has a long way to go and leaves much to be desired, so I thought I'd try out the Beta on Windows where there is at least some hope to be pleasantly surprised. So, this is just a quick look with the features I noticed on first glance. 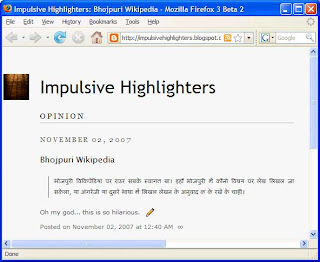 First of all, Hindi rendering actually works. What annoyed me all the time in Firefox 2 was that Hindi rendering worked on some sites (such as the Hindi Wikipedia) but not on any blogs that I visited. This leads me to believe that the Hindi Wikipedia is encoding the Hindi in some friendlier way that is less prone to looking like a pile of trash. In any case, after installing Firefox 3 B2 on Windows, pages like this, this and this now look just fine. Phew, big relief!

The second most noticeable thing is that the address bar is a lot more active now. If you start typing something in it, it not only finds websites that have the same domain name as what you're typing, but also searches the entire URLs and the web page titles for all the web sites you've visited and shows them right there. Neat! Also, all windows now have an address bar; mainly, this means that pop-up windows show their addresses (for security reasons, presumably), although the field is not modifiable, so you can't type in an address.

There is now an 'Applications' pane in the Firefox Options which lets you decide what happens when you encounter files of a certain type on the Internet (whether they are handled by a plugin, opened with a certain application or just downloaded). 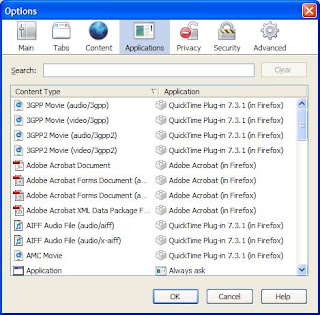 There are also some changes to Bookmarks. In order to bookmark a page, you can still use the age-old Control+D shortcut, or you can click the star icon that shows up in the extreme right hand side of the address bar; the star is empty if the web page is not in your bookmarks and filled with yellow if it is. In either case, a little pop-up box shows up in which you type the name of the bookmark, where it's stored, and here's another new feature, any tags you might wish to associate with it. There is also, by default, a folder called Smart Bookmarks in the toolbar which has "Most Visited", "Recently Bookmarked" and "Recent Tags", all of which show what you'd expect them to. If you choose "Show All Bookmarks" from the Bookmarks menu, you'll see the new Places Organizer which is basically the new Bookmarks Manager, and one cool addition is that it has a Search Box. 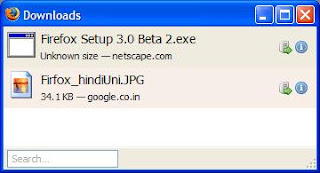 The Downloads window also looks nicer and has a Search feature. In general, one of the themes in Firefox 3 seems be adding Search to as many places as possible (Places Organizer, Applications pane in Options, Downloads) and improving it where it already exists, such as the Address Bar.

Lastly, the JavaScript engine seems to be faster because the animation on Impulsive Highlighters is a lot smoother on my slow computer.

(The only bug I've encountered so far has been while writing this entry, which is that when I inserted an image into the Blogger post editor and cut it to the clipboard, my cursor disappeared and has not yet returned!)

[UPDATE: I tested Firefox 3 Beta 2 on a Mac also, and I'm extremely happy to see that it also benefits from both the Devnagari support and the dramatically boosted JS performance.]

An extremely useful blog for those of us who use our Macs for more than just English. The first entry I glanced upon was enough to convince me of its resourcefulness.