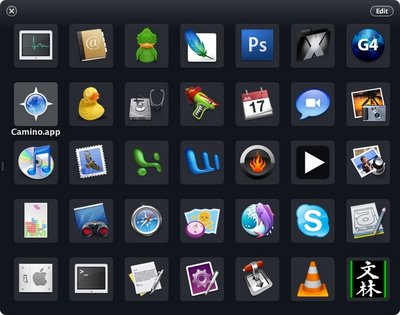 Dark have been my days of long. For years, I've been trying to abandon the Dock so that I can save some very precious screen estate especially because most of my life I've used (and am still using) screens that are approximately 1024 by 768 pixels. Every pixel on my screen is precious and with Overflow, I get 71680 pixels (or about 9% of my screen) back from the clutches of the Dock.

It's basically a very nice launcher. I usually launch a lot of things using Spotlight, which is all well and good except for the fact that it takes a couple of seconds. Overflow is basically a window that pops up when you press a certain keyboard shortcut and displays an array of icons that you can click to launch. Very importantly, you can also type the first few letters of an item to directly go to it. This means that if I give it a keyboard shortcut like Option-Space (by default, it's F1) and enter the first few letters of the name, I'm basically launching the thing in exactly the same way as I would have with Spotlight except for the fact that it's instantaneous.

Some might argue that QuickSilver is what I need, but I would have to disagree. QuickSilver is very powerful (and very free) but it's overkill for my needs. The list of applications I want to launch is very limited and QuickSilver has a much larger footprint than Overflow. However, when I'm searching I usually want the pervasive power of Spotlight and when I'm launching I need the small footprint and even more instantaneity of Overflow. QuickSilver is something in between, but is the perfect balance for a lot of people.

The only downside of Overflow is that it's $15 instead of free or donation-ware which is a more apt price for such a simple app. However, this tiny app (1.2MB as UB) is quite indispensable for my workflow (after only 24 hours of using it) and I definitely recommend a try. It's like NewsFire for RSS, there's nothing better, sleeker and simpler.

I love this video. It might seem like it's rigged, and to some extent it is, but it really isn't all that far from the truth.

Inside Mac Games: Do you plan to implement [3D gaming support] in the future?

Rudolph: This is something that we're already working on. The goal is to have OpenGL and DirectX support in our next version, which should be in beta around the turn of the year.

I'm glad that they've released a beta. I do only minor work in Photoshop but hate to ever open it up on Intel Macs because it takes ever so long. Digg.com had the right link for it because, labs.adobe.com apparently has still not been updated to point to the Beta download page. You'll also need a product key which you can get if you have a legit Photoshop CS2 key by going to the Beta Trial page.

Even though I've spent only about 15 minutes with Adobe Photoshop CS3, I already find myself quite impressed. First of all, it's fast. Not only on a Mac Pro, on which it launches nearly instantaneously (as far as Photoshop launches go), but also on a PowerBook G4 on which it opens a lot faster and feels a whole lot snappier than CS2. 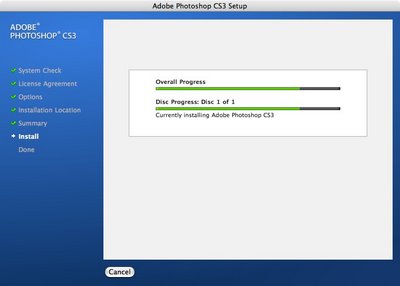 The installation process is also a lot more streamlined although this is probably subject to a lot of change before the entire Creative Suite 3 is released. Still, I shall be glad if they keep approximately the same steps because currently it involves very few clicks and it's very easy to get PS CS3 up and running. 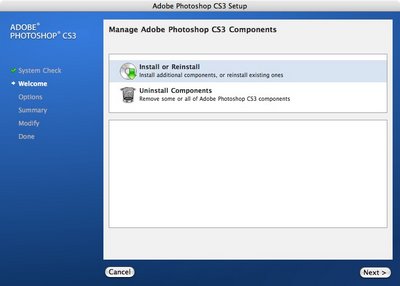 One thing I will definitely find useful is a proper uninstallation option in the Setup program (which detects automatically whether the thing is installed on your Mac or not). With suites like Adobe's, which install a bunch of stuff here and there all over your hard drive, a drag-to-trash is very much an incomplete process as far as getting rid of the thing goes. Now that Adobe has added uninstallation as an option, I can forgive them for not using Apple's Installer which currently has no provision for uninstallation (in fact, the only way to uninstall Apple's very own Developer Tools is to manually run a perl script which they provide from the Terminal - most certainly a very inelegant method). Of course, the better way is still to do what Microsoft does with Office which is to design it such that it's contained within its folder in the Applications folder, but I'll take what I get. 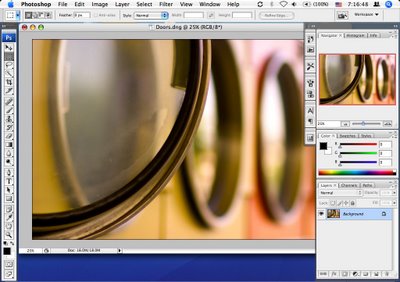 What you see above is the default view of Photoshop with an image (one of their samples) open. 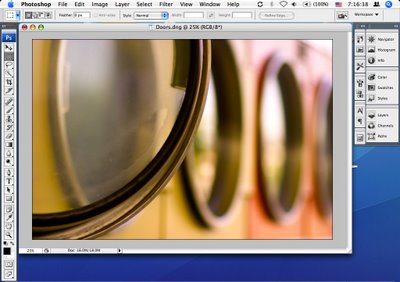 And in the picture above, you can see a clever UI feature which allows you to collapse all the palettes when you're not using them. Just look at the screen estate we're saving on a 1024x768 screen like mine! 12" PowerBook and other small screeners will love this (also, if Apple releases the rumoured MacBook Thin in January, perhaps even more people).

Honestly, I'm a shallow person (not to mention lazy) and not even all that involved with Photoshop on a day-to-day basis. The fact that it runs faster on all Macs and natively on Intel Macs is enough to make me use it and that's all I needed from it anyway. If you want actual details about new features in the thing, read Macworld's First Look and Video Preview.

Will the irony ever end?

Thank you for being so blatant, Microsoft!

I really like this ad. "Microsoft" is nowhere mentioned though.

I don't honestly think so. In the article that I've linked, I have to say, that at some points in his essay, Rob Griffiths is talking out of his ass. I consider myself to be a power user in almost every aspect yet I have never used macros in Office applications in all my 11 years of using computers. Whenever Word or Excel tell me that there's a macro in the document, I usually ask them to disable it. And if this is the case with a person like me, I really expect that the scenario for 70-80% of users will be even simpler, i.e., they might never even have seen that window that asks them if they want the macros in the document to be enabled or not.

I say 70-80% with such righteous confidence because most Mac users are admittedly not corporate users. Rob Griffiths comes from working in one of those rare organizations that happens to use Macs for all their tasks and so he feels the pang of VBA-less Office a lot more than all of us. But, for the college student, purchasing a Mac in September 2007 or for the home user, there will be no long argument on whether he should buy Office 2004 or 2007 because, "Oh, 2007 doesn't have VBA support!" Heck, even I wouldn't give a damn considering all the speed benefits I would get out of a native version of Office on Intel Macs. Plus, I have a copy of Office 2004 which I can use in case I get one of those rogue files and anyone who really needs VBA support can, I'm sure, purchase Office 2004 and Microsoft, I assume, will keep selling Office 2004 for the same reasons. It runs "fine" under Rosetta just now, and with faster Macs, that's only going to get better.

In short, there's no need to panic. Of course, I'm not happy that Microsoft is getting rid of VBA even though I never used it, I am glad Office 2007 will be Universal and offer better Automator and AppleScript support - two things that I have actually used and can use.